When Brett Chappell joined Teach For America and entered its summer training institute in 2012, he had flashbacks to his time in boot camp.

Once more he was undergoing intensive training on how to embrace new scenarios, become part of a different culture, and alter the ways he talked, walked and acted.

"In the service, you’re thrown into environments where failure is not an option," said Chappell, 48.

Teaching was no different.

Chappell, a former enlisted Navy SEAL, is one of 320 veterans who have gone through the Summer Institute at Teach For America, a nonprofit organization that trains, places and supports new teachers. Program participants, or corps members as Teach for America calls them, work in high-poverty schools across the country for two-year terms. Along with initiatives to recruit a more diverse pool of applicants in recent years, the organization has also upped its efforts to place veterans and military spouses in the classroom.

The initiative launched in 2012 after the organization noticed an influx of applications from candidates affiliated with the military. It is designed to support military life and culture.

"A lot of the military veterans who join our program see educational inequity as their next mission," Mounticure said. "They see it from the perspective: This is a problem in our country. I want to be part of the solution."

That was true for Ashley Nicolas, 29, who was looking for a service opportunity between her transition out of the Army in 2014 and the start of law school.

"From the service member’s perspective, it kind of gave me a chance to get my feet underneath me in my transition," said Nicolas, who ended up teaching and coaching at a high school in San Jose, California, as a Teach For America corps member. "(I) felt like I needed more time. Those two years in TFA, I was still able to serve while I was trying to make those decisions for myself." 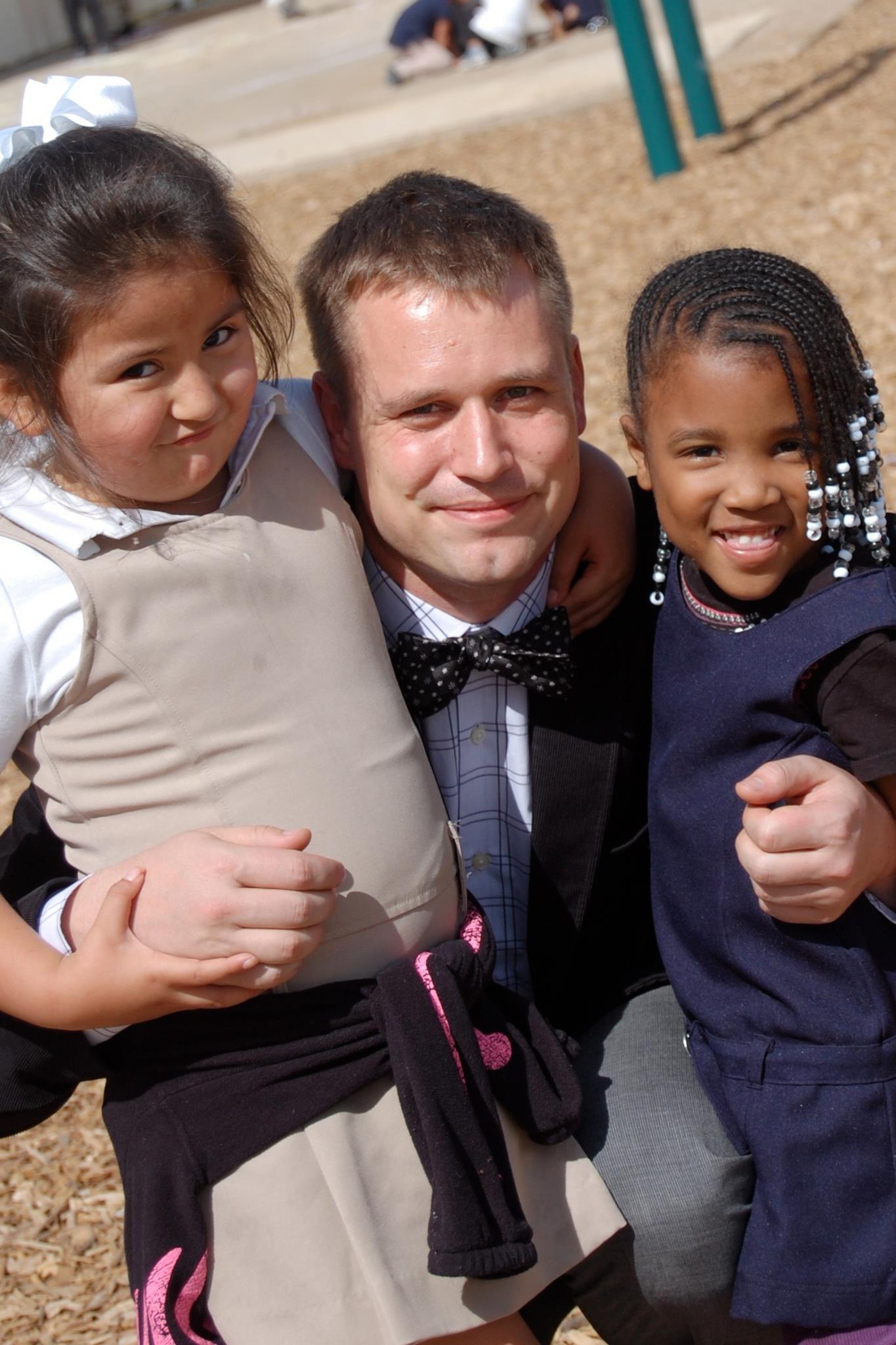 Charles Stewart with kindergarten students at Lorenzo DeZavala Elementary School in Dallas in 2013. Stewart taught with Teach For America from 2010 to 2012, shortly after separating from the Army.
Photo Credit: Charles Stewart
Charles Stewart first heard about the organization as an ROTC cadet in college. Originally from New Mexico, the state with the highest level of child poverty, Stewart appreciated Teach For America’s focus on combatting educational inequity for low-income children. He applied for the program and received a four-year deferral to complete his military service before joining the corps as an early childhood educator in 2010.

"For those veterans that really truly enjoy developing others and are mission- and service- oriented, it’s hard for me to say enough about how rewarding it is to work with kids – to work with students. That is what the most energy-giving part of the work is," he said.

While Teach For America has led to careers in education for 80 percent of its 53,000 alumni, including Stewart and Chappell, not all see themselves staying in the field long term -- a point of contention for some critics. The organization has also drawn controversy from those who say one summer of training is not enough to prepare teachers who have not earned a degree in education or received their certification through traditional methods.

But Mounticure said the organization is "not just some alternative [certification] program." Corps members have year-round, one-on-one mentoring and coaching, which is something that new teachers don’t always get. The organization also offers funding through grants and non-interest loans for corps members pursuing a teaching certification. It is also affiliated with AmeriCorps, through which corps members can be eligible to receive nearly $12,000 to go toward paying student loans or future educational expenses.

"Being a part of our organization itself just provides so many outlets and so many open doors," Mounticure said.

With a goal to hire 100 veterans per year, Teach For America has partnerships with various other nonprofit organizations such as Student Veterans of America, Troops to Teachers and Got Your 6 to get the word out about its program.

Without the targeted recruitment, retired Marine Chief Warrant Officer 5 Sequoia Aldridge, who learned of Teach For America at a Troops to Teachers event, isn’t sure she would have ever heard about the organization. Aldridge knew education was going to be her second career, and she was looking for a way in.

"I was looking for that gateway. I don’t have a degree in math, in social studies, in English, so how do I become a teacher? How does that happen?" said Aldridge, 50, who had a master’s degree in education but no certification at the time. "I really did not have a desire to go back to school and take five or six more classes. I really had a desire to start teaching, and Teach for America provided that gateway."

Staff also understood that she needed a placement near her husband’s duty station at Camp Lejeune and worked to help her find a school -- something the organization takes into consideration for all of its military spouse corps members. Aldridge now teaches eighth-grade science in La Grange, North Carolina, where her military training seeps into the classroom.

"The same high expectations I had of Marines and as a leader I have of my students," she said. "I understand setting the example. When they come in the classroom, I’m prepared. I’m ready."
REBOOTCAMP NEWS
More Rebootcamp News
VET ALL STARS
More Vet All Stars
Close
Now Playing

‘Be a bro’: How a commander’s sexism derailed this pilot training class — and brought down AETC leaders