ARLINGTON, Va. — Iraq war veteran Brian Mandes’ new job may not be on a battlefield, but his weapon of choice is still a gun.

This one, though, shoots nails instead of bullets.

Recently hired to work on building an addition to a home in northern Virginia, Mandes, 44, is fulfilling a lifelong dream of working in the construction industry. And with just four weeks on the job, he already has big plans for the future.

"I want to be on HGTV," he said, referencing a star of "Fixer Upper," a show on the channel. "I want to be like a Chip Gaines."

But Mandes’ dreams of becoming a reality TV star will have to wait at least four years until he finishes his training with Veterans Next Mission, a new Virginia-based nonprofit preparing military veterans for careers in construction. Mandes, a retired Army National Guardsman, is one of three rookies who make up the nonprofit’s inaugural class.

Mandes received some construction training as part of a vocational education program in high school. But experience is not a prerequisite for the program. To qualify, veterans simply have to have at least a general discharge from the military and a willingness to learn.

"We’ll take a raw trainee — never seen a hammer — and train them," said Bob Luckett, Veterans Next Mission founder and a Vietnam veteran.

Luckett, 69, has spent over four decades in construction and built thousands of homes, he said, including the one in Arlington that he and his trainees are now expanding by building a great room on the first floor and an extra bedroom above the garage. After selling his company two years ago, Luckett, who is also a traveling preacher, knew he wasn’t quite ready to retire from the industry.

"I was trying to decide what to do with the rest of my life," he said. "I took a job with a consulting company for a few years while I hashed that out, and during that time, we had some houses that we wanted to have deconstructed, and we hired a nonprofit to deconstruct the houses. And watching them, I thought to myself, ‘This would really be a great job for veterans.’"

Then he heard on talk radio that some veterans struggled with their transitions from military to civilian life, and the idea for Veterans Next Mission was born.

"I thought (construction) would be a good fit for veterans because they’re used to working as a team, they’re used to following directions, used to showing up to work all the time. And so that was how it got started," he said. 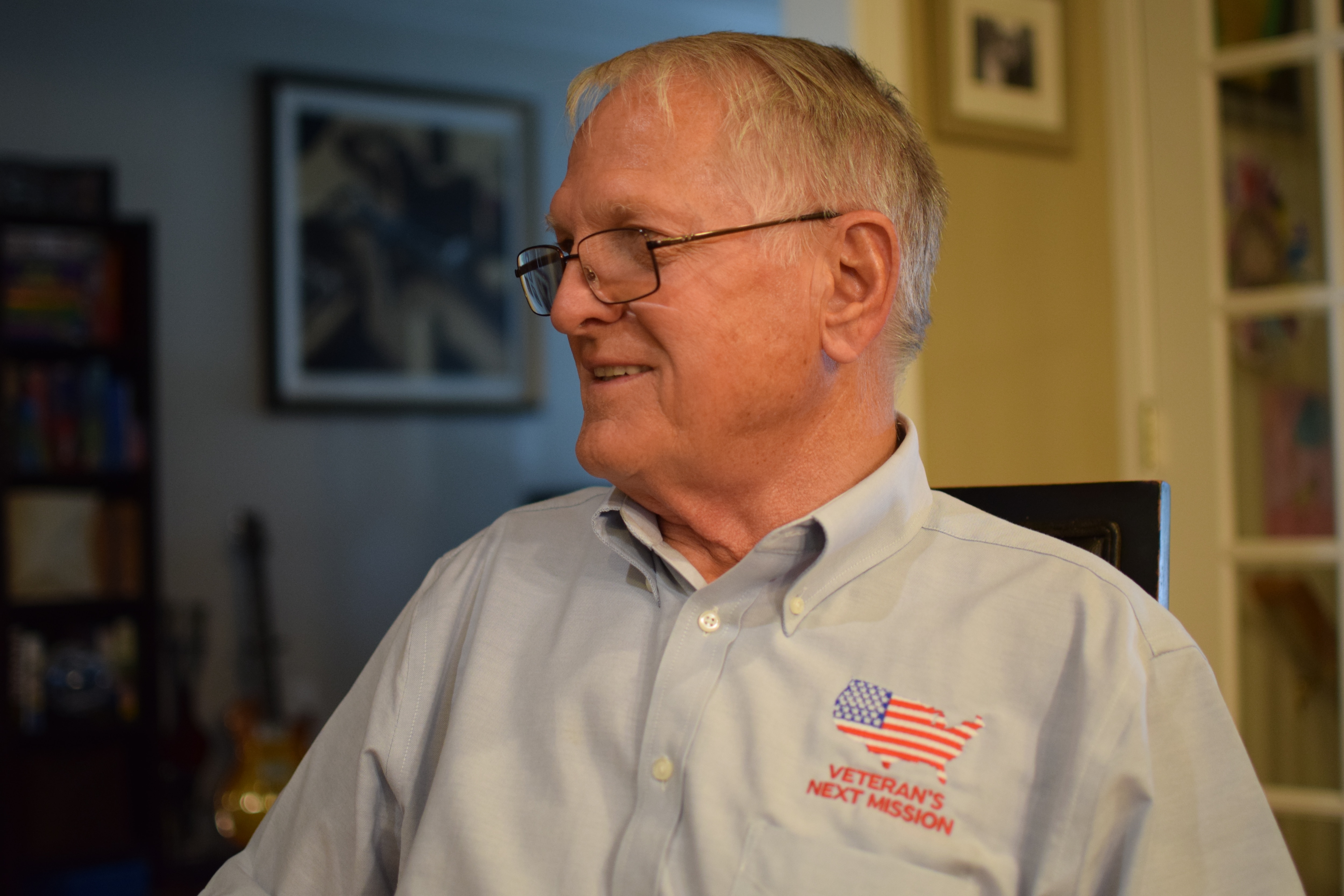 Bob Luckett, 69, has more than 40 years of experience in the construction industry. Luckett founded Veterans Next Mission last fall after hearing about veterans' struggles with transitioning from the military to civilian life.
Derek Lett, the nonprofit’s first recruit, left the military in 2013 after getting a DUI. He took on various jobs but struggled to find full-time work to provide for his growing family.

Lett is grateful to Veterans Next Mission for offering him a second chance and said the crew — though only together a short time — already works "like a well-oiled machine."

Most of the training takes place on the job site, with Luckett working side by side with the rookies to provide instruction and supervision. And so far, with as many contacts as he’s made in the industry over the years, Luckett said there’s been no problem finding customers.

"I can give them scads of references on jobs just like this one," Luckett said. "Truthfully, because of the supervision, it’s done more right with the trainees than with some crews that are out there building right now because they don’t have the supervision to make sure they do it right."

Plus, there’s an added incentive: Because it’s a nonprofit, customers can write off their expenses.

The majority of the proceeds go toward paying the veterans a stipend that starts at $12 an hour — on par with some retail jobs and more than they’d make delivering pizzas, Luckett said. After each year in the program, trainees will receive a certificate to put on their resumes should they choose to leave.

The organization is currently working to obtain official recognition from the Department of Veterans Affairs so that veterans can use their Post-9/11 GI Bill benefits to supplement their living costs while in the program. It is also exploring a partnership with American Military University to facilitate trainees’ formal education in business or related fields. 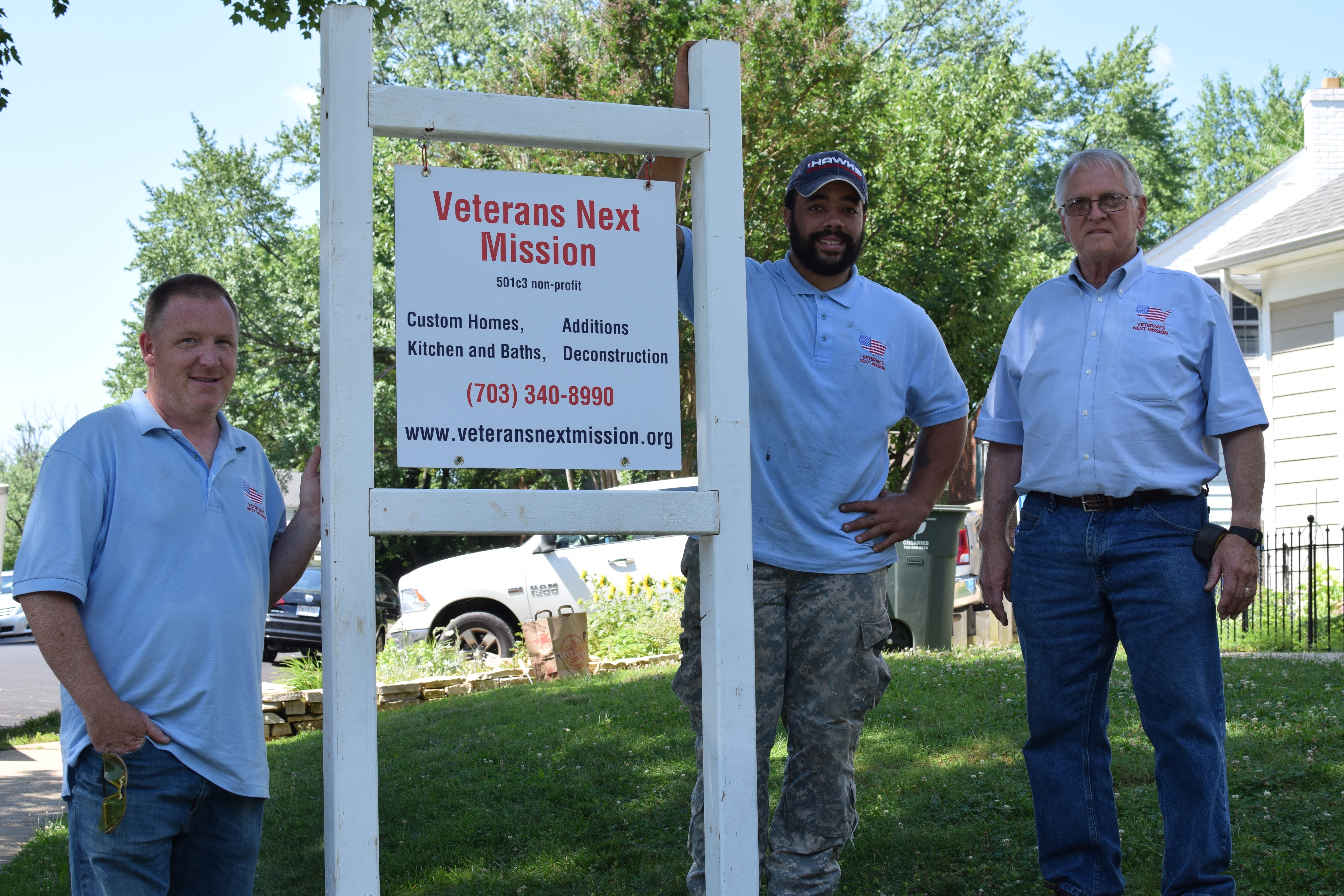 Brian Mandes, left, and Derek Lett, middle, are part of the inaugural group of trainees at Veterans Next Mission. The new Virginia-based nonprofit, founded by Bob Luckett, right, offers four years of on-the-job construction training to veterans interested in the entering the field.
Photo Credit: Natalie Gross/Staff
Veterans Next Mission is just seven months old, but its model has already sparked interest beyond the Washington, D.C., metro area. In time, Luckett said the organization could start branches in other parts of the country.

But first, Luckett wants to expand his crew and hire more trainers to eventually split projects among teams consisting of fourth-year, third-year, second-year and first-year trainees.

"We figure that at the very least, they’re going to come out as a craftsman in whatever trade they’d like," Luckett said. "At the most, they’ll come out as independent contractors or have an avenue to go in as an assistant superintendent with some of the builders around."

That prospect is enough for Mandes and Lett to want to stick with the program for the full term.

"I thought about the finish line, and in four years I’ll be 30 years old," Lett said. "When I think about the position that I’ll be in, that’s something that I want."
REBOOTCAMP NEWS
More Rebootcamp News
VET ALL STARS
More Vet All Stars
Close
Now Playing

Airman gets life in prison for death of Mennonite woman