WASHINGTON — Sen. Joni Ernst arrived on Capitol Hill in 2015 best known for a pun-filled campaign commercial where she promised to "cut pork" like she did castrating hogs on her family’s Iowa farm and "make ‘em squeal" when it came to sparring with Washington insiders.

So it may come as a surprise that in the last two years she has quietly worked to build a bipartisan resume on military and veterans issues, angling for compromises in lieu of confrontations in the politically fractured Congress.

"I don’t care what legislation I’m working on, if I can find a Democratic co-sponsor, I think it makes it a better bill," the Republican Iowa senator said.

"Certainly I could do these on my own. But you know what? Republicans lost lives, and Democrats lost lives overseas. This isn’t about party, it’s about men and women who served their country."

Even before President Trump’s presidential campaign last year — where even members of his own party were the target of insults and crude nicknames — routine "bipartisan" business in Congress had become a more difficult lift. The two sessions before Ernst won election were the least productive in terms of new laws since World War II. Lawmakers also shut down the federal government for 16 days in 2013 and came to the brink of numerous other operations halts. 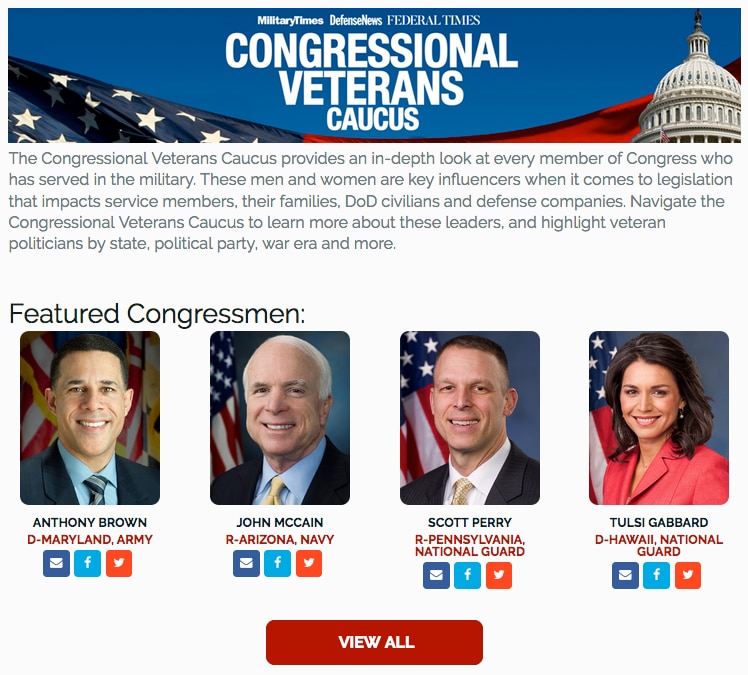 But Ernst sees a shift happening in the halls of the Capitol, at least when it comes to issues regarding the military and veterans. "To be able to share that effort, it’s important to do that."

She has worked closely with Democratic colleagues on issues of women in the military and veterans health expansion, topics she says should be exempt from political gamesmanship.

"I have a level of optimism, because working together on these issues makes complete sense to me," she said. "I think we can get things done here."

At 46, Ernst is one of the younger lawmakers in a chamber where the median age is in the 60s. (The youngest is fellow Iraq War veteran Sen. Tom Cotton, R-Ark., at 40).

She was also the first female veteran to serve in a war zone ever elected to the chamber. In November 2015, she retired from the Iowa Army National Guard after a 23-year career that included 12 months in Kuwait in 2003-2004 as the commander of the 1168th Transportation Company, making frequent trips into Iraq.

That military resume has steadily become a central part of her legislative push. She’s a champion of legislation to start a new DC memorial for veterans of the Global War on Terror and a frequent critic of lax Defense Department sexual harassment prevention.

In just two years, she has already been given control of the Senate Armed Services’ emerging threats and capabilities subcommittee, a role with key oversight (and budget decision authority) of the Defense Department’s special operations and intelligence arms.

She can be seen around Capitol Hill sporting an Army pin instead of her official legislative branch one identifying her as a senator. Ernst famously wore camouflage heels during the Republican rebuttal to President Barack Obama’s 2015 State of the Union address, and unsubtle reminder of her time in the ranks.

But Ernst said despite the influx of new military influences in the upper chamber, much of her time is still spent educating her colleagues on life as a veteran and the impact of defense policy decisions.

"It was difficult to be able to go into what many would consider the old boys club and get things done, and learn that just as in the military you have to own the room, you have to be the subject matter expert on what your passions are," she said.

"Honestly, as a veteran, I think the one thing the military taught me was a level of leadership and confidence necessary to execute a mission. So, here I am in the Senate, and that’s my job: to execute my mission for the good of Iowa, but also veterans as a whole."

Despite the longtime presence of veterans like Arizona’s John McCain and Mississippi’s Thad Cochran in the Senate, Ernst said she still finds her staff and herself explaining the intricacies of VA medical offerings and military life to colleagues on other committees. "There’s a level of education that needs to be done."

The latest effort is that memorial, which has received pushback from lawmakers because the wars in Iraq and Afghanistan still are not finished. Supporters have argued the slow pace of planning and construction (it will likely take at least a decade) demand action now, to ensure the veterans of those wars can see the site before their elder years.

Ernst is emotional when talking about the project, because of the personal connection to her and her family. Her husband, Gail, served with the Army Rangers for nearly 30 years. Both know individuals killed in combat.

"Right after I returned from Kuwait and Iraq. I ran into another fellow guard member who is our county veterans director now," she said. "He had gotten word we had lost a soldier. And your heart just stops. It stops.

"I come to find out it was a friend’s family, it was their son. Before he got into the Guard, he talked to my husband and I about serving in the military, how he thought that would be so great, asking what was it like. We were encouraging.

"Today, his father honors his son, they do motorcycle rides and events. But he will never ever be able to bring his son back, but he knows it’s what (his son) wanted to do. Those are the folks we need to honor."

Ernst’s bipartisan overtures shouldn’t be confused with a moderate voting record. She’s a fiscal conservative who has earned passing grades from right-leaning think tanks for her voting record thus far.

But she did raise attention earlier this spring when she called out the president for his frequent travels to Florida as a waste of taxpayer dollars. She downplays the significance of the comments, calling it "only fair" considering she criticized President Barack Obama for similar trips.

For most members of Congress, that type of remark prompts reciprocal attacks from the White House. In her case, the president publicly praised her at a veterans event just a few days later, calling her "a tremendous woman" who "knows more about veterans than anybody."

She hopes her future fights on Capitol Hill go as smoothly.

"The point of joy is coming in and be able to dispel a lot of those thoughts about being a freshman senator, about being a woman, about being a veteran," she said. "I enjoy getting rid of the preconceived notions and set my path forward."


Leo Shane III covers Congress, Veterans Affairs and the White House for Military Times. He can be reached at lshane@militarytimes.com.